Doll Day on the Midway

The Stupsi doll pair sold listed for around a year, I bought them for $1.50 each, I sold the pair for $40. If I had children in my life, I would have kept them. 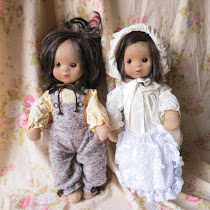 And wouldn't cha know, the same day I sold the Stupsis, I found this mystery bag of dolls for $2.99 at thrift. They looked a little bedraggled but promising. I think the one in the middle is a strawberry shortcake. Some have had a "little" hair trimming done. 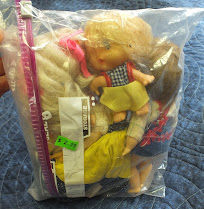 The group cleaned up quickly by putting them delicate cycle in a lingerie bag with all of their clothing left on. 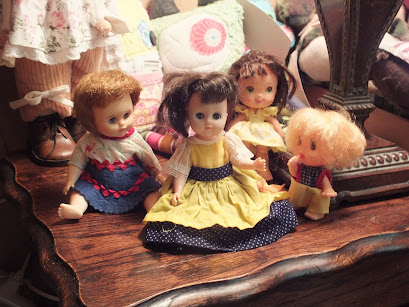 I used to have a doll like the one on the far left. She is joining my patriotic collection and will be further festooned in red, white and blue. Doll in the middle has punk-out potential and other than what little is left of her hair, all of her costuming is intact. The others will be listed for sale.
I am starting to see the other resellers. I rarely hit thrift during the week but it is Staycation Week in the Von Zalez household. The others snag the quality stuff. I was a few minutes too late on a well executed oil on canvas floral. Made my heart ache.

Fun Find of the Day - a Prince The Hits 2 CD. I have always been a fan but never bought any of his recordings. It is a happy Tami day when I find his music secondhand. 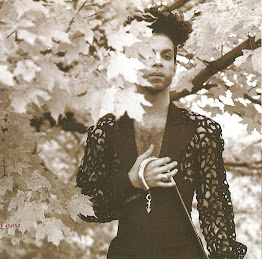 My latest collecting obsession, sheet music and music compilations for guitar and vocals. This 99 cent gem is a forever keeper. I have been collecting violin music for many years now. When I played the violin, I recall how expensive sheet music was (and still is). 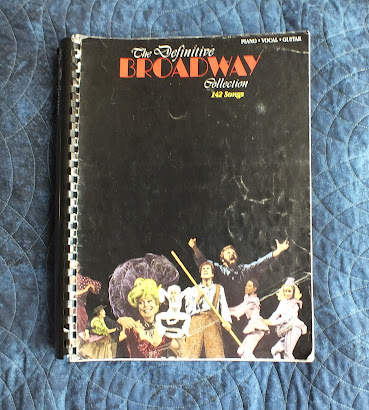 I've been rearranging my remote workspace (aka the spare bedroom). This cross stitch was initially under glass and framed in gold. The frame broke and is being fixed. I took the opportunity to re-frame the hibiscus flowers in a glass-free traditional wood frame (pointing the right direction). 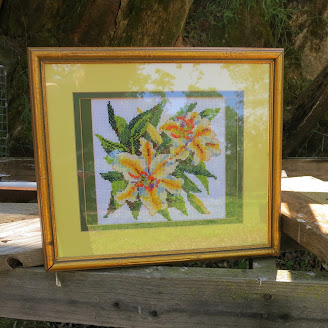 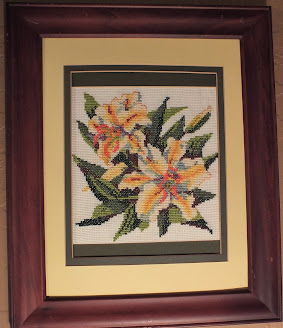 Have you been rearranging your living space? Doing home improvement projects?

Ending with a BOLO wooden alphabet blocks ($1.99). These Sesame Street ones I predict will go quick, being sold as a lot with other wooden blocks. I also picked up an adorable working 50 cent Disney toy I will highlight on my next post. 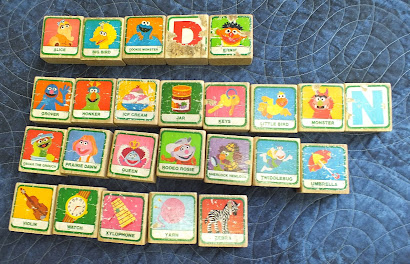 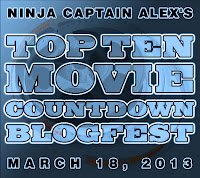 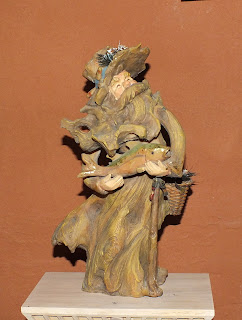 I picked up Fishing Santa $2.99 at thrift. He is a perfect precursor to my Countdown to Christmas posts. I have decided to withdraw from my college classes. It is too much commitment for me to fulfill. Work stress is at a high level right now. I have to remain focused on keeping my health at a even keel. I want to keep doing my fun stuff, like this blog, and my reselling.  Mystery music lover dropped off psychedelic rock at thrift, and I am the lucky recipient. I also snabbed a pair of sunglasses that will eventually make an appearance, and another set of Tarot cards. These are not as neat as my 70's find of Tarot cards, so they will most likely go up for sale.  Sometimes a creative project goes awry, and you have to rethink the design. I started this project and decided I didn't like the borders on the blocks. I got the seam ripper out and took all of that marginal fabric off of the blocks.  I lurk on the online auctions, and found this mixed lot of quilt blocks and fabric. I
Read more

I Made the 1,500 Mark and Terrific Tarot Cards Found Me 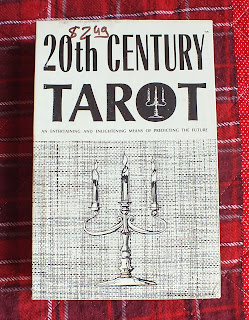 I made my goal of 1,500 total listings. A. lot. of. work. The last 200 or so have been Christmas CDs. Supposedly, there is a reseller in my area with 30,000 listings. I am betting that is a full-time job.  Algorithms fascinate me. I don't understand all of the ins & outs of eBay's algorithms, but I do know when I am listing in a certain category, that is where I am usually getting the sales. I was going great guns, then suddenly sales dropped off 50%. Sewing patterns still remain the most watched item.  I continue to refine listings. After I pass a milestone, such as this 1,500 one, I work up a buffer of about 25 items. With that buffer, I start ending low performing listings. My intent with CDs is to lot the lower priced ones together.  One aspect I do enjoy about composing the listings, is discovering the potential value of an item. I spend 25 cents to $2.99 on CDs, depending on value. Some I know right off have value, the off-beat ones, DDD recordings, and those that are
Read more I have a slew of pink images for you to link up with Beverly's howsweetthesound . ÚBOK, Žena a Moda, April 1969 Audrey Hepburn Costume sketch by Edith Head by Marge Champion for ‘Mr Music’, 1950 1950s Pink Royal Typewriter  ~ JoeVintage Ann-Margret, 1962 And seal it with a kiss!
Read more